Konica Minolta had already gone back to the drawing board themselves, though. And the differences between the two models are noteworthy.

The metal case of the original has been replaced by a white plastic box that can stand up without assistance. And the FireWire and USB ports of the original have been reduced to a single USB 2.0 port on the 5400 II.

One disappointment remains. If your images are not 24x36mm 35mm frames, forget it. This is strictly a standard 35mm slide scanner. No other formats need apply.

But what made the 5400 famous hasn't been tampered with: that 5400-dpi resolution.

The 5400 II does show some evidence of evolution, too. First, it improves conversion of negative film with its new Film Expert Algorithm. And second, it's faster than the 5400. Using an improved drive mechanism, optimized internal processing and proprietary optics, scan time is down to 25 seconds a frame. It also uses less power (20 vs. 30 watts) and is a bit wider and shorter.

But our enthusiasm was tempered when we learned the included software could not actually calibrate the scanner. Konica Minolta does include profiles for scanning positives and negatives, but you can't scan an IT8 target and build your own profile in the supplied software.

Fortunately, since version 8.2.13, VueScan supports the scanner (although VueScan identifies it as a 5400, not a 5400 II). So you can profile the scanner in VueScan.

Working with the 5400 II was a pleasure. The faster speed seemed to make up for, well, everything else. We had both 5400 models here and kept gravitating toward the II. Let's see why.

The scanner ships with two plastic, hinged holders. One holds four 35mm slides, the last of which can be swapped with the holder in the scanner. The other holds a six-frame strip of 35mm film.

They are not identical to the 5400's holders, though. Those have pointed feed ends, rather than the blunt ones of the II. The negative holder has lost a couple of frame struts. Negative film isn't always framed precisely the same, although it's hard to see how this accommodates any deviation.

Also included is a USB cable, the AC adapter for power and a reset tool (so you won't have to unbend a paper clip) to close the scanner door. Someone explain to me why scanner manufacturers always include a cable (or two) while printer manufacturers never do. There should be an ISO standard on this.

Two CDs are along for the ride. The 5400 II CD includes drivers, profiles and Konica Minolta's scanning software suite. The other is an Adobe Photoshop Elements 2.0 CD. An instruction manual and a warranty card complete the kit.

Hightlights of the 5400 II features include: 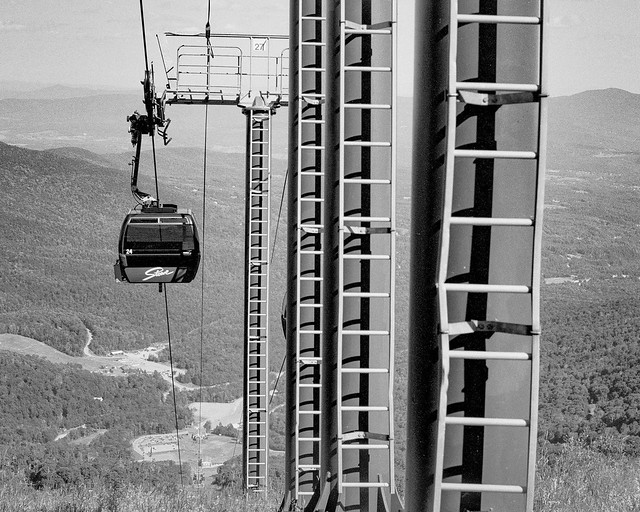 Fast user switching is not supported on either Macintosh or Windows operating systems.

As with any USB peripheral, you should install the software before installing the hardware. When the device talks to your computer, your computer will be able to recognize it.

Software installation was simple on both Windows XP and OS 10.3.8.

Hardware installation was likewise straightforward. Connect the power adapter to the scanner, plug it in, cable the scanner to your computer (avoiding any USB hubs) and, with your computer running, turn on the scanner's power switch. In normal operation, you simply have to power the scanner on or off as needed.

The scanner goes through an initialization stage (blinking its indicator lamp) before it's ready to get to work.

Like the 5400, the front panel is simple. Apart from powering the scanner on or off and loading film holders, you really don't need to access it.

The On/Off button with the indicator lamp is at the top to the left of the film holder slot. Below it but still to the left of the slot are the Scan and Eject buttons. The Scan button (also called the Quick Scan button) launches the DiMAGE Scan Launcher. Protruding from the bottom of the face plate is the Manual Focus dial. When enabled in the software, this adjusts focus by twisting left or right.

The back panel has just the one USB port and a connection for the power adapter.

There must be a special trade school somewhere on a lost continent that teaches film holder engineering. We mere humans must fiddle with these things until, in exasperation, we frame the manual illustrations on the wall closest to the scanner.

The trick to loading a film holder is to remember that down is up, up is down, right reading is upside down. Since holders are uniformly black (to avoid reflecting light), telling up from down can be challenging. Indicators are embossed, but it would be nice to add Braille.

The slide holder has two latches at the bottom (which is actually the top when inserted into the scanner) and helpful frame numbers oriented correctly that disappear when you open the holder. Well, at least you don't have to worry about portrait and landscape orientation. Everything is landscape.

Load four slides emulsion down (so they appear right reading) and close the holder. The last slide can be replaced without ejecting the holder from the scanner.

The negative holder has a single latch. Same drill. Emulsion down, right reading.

But first, launch your scanning software.

Ejecting the holder can be done in the software after you've scanned everything or just by pressing the Eject button. We prefer to control the scanner from the software interface, but the button is helpful when the software fails to respond.

We generally prefer not to use the manufacturer's scanning software, opting instead for VueScan or SilverFast. The advantage, for a reviewer, is being able to focus on the hardware. The 5400 II ships with several proprietary scanning applications, which we did test. It does not include a copy of SilverFast.

We can heartily recommend the Easy Scan utility. It takes you step-by-step through the scanning process, with buttons to enable all the advanced features and even an edit option to adjust the final image beyond what the scanner likes. Instructions were very clear and easy to follow and we got excellent results quickly.

We have been less thrilled with the main Scan utility, but the problem is the interface rather than the functionality. There are more icons than you can easily take in, even after becoming familiar with them. We found ourselves continually referring to the help message box in the upper right to find out what any particular icon was doing. You can get the job done, but you have to work at it.

The Batch utility is accessed through the Launch utility, which also provides access (via individual buttons) to the Easy Scan and Scan utilities. After configuring Master settings for the batch scan and initializing the scanner, you can scan holder after holder of images. You can even configure the Quick Scan button to run the Batch utility. Very nice.

In each case, the results showed fine detail and excellent tonal range and color capture. It's difficult to draw the line between the raw capture and the corrected file (particularly in the case of negatives), but we saw some gorgeous histograms.

On the other hand, we found it very easy to mangle an image by applying all sorts of corrections. When you need them (to restore faded colors, say), they're nice to have. But for archiving your film images, less correction goes a long way. Postponing corrections like grain suppression may not be efficient, but it's very easy to oversharpen an image, for example. And bumping up the contrast (or letting Pixel Polish do it automatically) clipped our shadow detail a bit more than we like.

What impressed us especially was how easy it was to confuse a color negative conversion with a slide capture. We didn't find much fault with the 5400's negative conversion and there's little evidence of the new Film Expert Algorithm in the 5400 II. You don't, that is, have to select a film type (as you do in VueScan). We threw a very oddly colored Kodak Gold 200-2 emulsion at it and got a very nice conversion (VueScan handled this well, too).

Detail at 5400 is impressive. You aren't likely to see this if you are scanning for small output. But 5400-dpi surpasses the old 4000-dpi standard.

In short, the scanner itself seems to outrun the software. So if you're unhappy with your scan, change your settings and try it again. The 5400 II can do the job.

It's hard to beat a box that can quickly (25 seconds) scan 16-bit channels with a dynamic range of 4.8 (implying a higher Dmax, the maximum density it can record) at 5400-dpi resolution (a 42.2-Mp file) with multi-sampling to reduce random noise. We did miss the FireWire connection and being able to create our own profile in the DiMAGE Scan software with an IT8 target.

Probably its biggest drawback, though, is its lack of versatility. It can only scan 24x36mm 35mm film. That, however, is also something of a convenience. You never have to crop or configure multiple target areas.

So if high quality 35mm film scanning is on your to-do list, this is a great way to get it done. When Konica Minolta went back to the drawing board, they went outside the box to engineer a remarkable scanner.