Working Area: 240x180x45mm, 3 Axis, 110V-240V; Software: GRBL Control. It can work on Windows XP, Win7, Win8, Win10, Linux. This engraving machine can be engraved plastic, wood, acrylic, pvc, pcb, wood or the like material. Drill bit can not engrave hard metal, jade or other hard materials. LaserGRBL is one of the best Windows GCode streamer for DIY Laser Engraver. LaserGRBL is able to load and stream GCode path to arduino, as well engrave images, pictures and logo with internal conversion tool. Unlike other GUI, LaserGRBL it is specifically developed for use with hobbist laser cutter and engraver.

LightBurn talks directly to your laser, without the use of additional software.

If your controller is GCode, Ruida, Trocen, or TopWisdom based, even if it's not listed it might be supported already - Download the free trial and try it for yourself. If it doesn't work, sometimes it only takes a day or two to make the required changes to support a new board in these existing families.

Please note that LightBurn does not Digital photo frame software for mac. support the stock M2-Nano board in the popular K40 laser. This board does not offer control of power through software - we recommend upgrading the board to take full advantage of LightBurn.

It's summer! The sun is shining, people are leaving their houses and everybody is outside having fun.. so I did what every self-respectable geek does: I bought myself a gadget :-).

I always wanted to own a powerful laser cutter that will cut up to 1' acrylic/wood, but my gadget-budget is no where near reachable for a commercial product.

Luckily, china is offering some really cheap DIY kits. These have no where near the power and capabilities that I would like to have, but the nice thing about DIY projects is that you can change them. You can hack, modify and extend them and you will gain a lot of hands-on experience that would miss by buying an off the shelf product.

So, I started looking for a >2W laser that uses an opensource controller (Arduino) and has some decent stepper motors (Nema17) and is easily hackable. I found a banggood.com kit and decided to pull the trigger..

The kit itself was delivered with within 3 weeks, which is not bad for a free shipping product from Shanghai. All parts were packaged pretty well, but this is in no-way a review of the kit, so let's start building!

Although there are some instructions, I find these cheap Chinese kits to assemble themselves if you follow some common sense. So I downloaded some high-res images of the final product and started assembly. The size of the screws was the biggest challenge for me, but in the end everything was assembled pretty robuust and I was ready to start focussing on the software.

I am no Windows person. I used to be, but almost 10 years ago I switched to a Mac. This was an issue. The controller that is used in the laser cutter is Arduino based. The Arduino uses an FTDI chip to do a USB to Serial conversion. This is pretty well supported on the major 3 operating systems (Windows, *nix, OSX). Somehow, this cutter was not detected by my Mac, which was strange, because I use to do Arduino projects all the time.. But I didn't feel like tinkering with this (yet) and I fired up an old Windows laptop and installed the software. 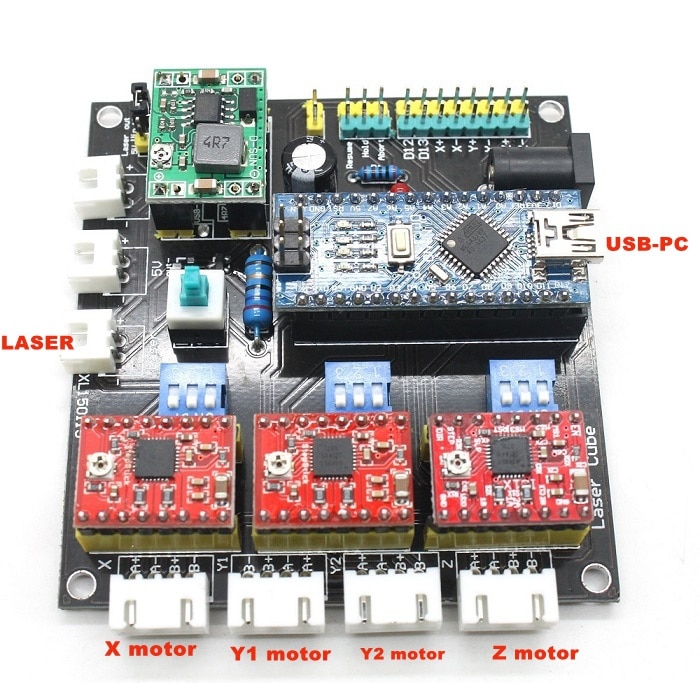 There is no better rush than a DIY project that comes to life! These were my very first cuts on the machine.

As we can see, by default the software is doing line (vector) drawings pretty good! But for the middle image I had to use different software. These kind of thick lines are not supported in the editing part of the software, and overall, the software was pretty poorly written. Sometimes the laser would just stop moving, but kept on punching a hole in my workpiece (upper left image). This was not acceptable!
On the bright side, it looked like my axes where installed correctly. There is no deformation in the image, so the hardware is working correctly.

Although I was happy with the results, bigger projects were not really possible.

As you can clearly see, there are some artefacts in this big piece. Some extra circles were drawn and there were some moments where the laser stopped. (see burn marks). Also, the outline of the image is drawn, but I want the image to be filled in completely.

The default software can obviously only be used for small and quick jobs. Although the quality of the hardware is pretty decent, the software is really the limiting factor of the machine.

Normally, a person would stop here. This is what the kit can do, let's start engraving stuff and impress the world.. well, that's nice, but if you're a geek like me the project is just starting.. let's change the controller software, drive the motors myself and see what this thing is really capable of!

Step One: use an authentic Arduino

I think it's wrong to sell counterfeits as the original thing. Certainly when the project is a open source/open hardware collaboration that supports makers, hobbyists and enthusiasts. Even though the controller was advertised as Arduino based, it is not compatible with the Arduino IDE, so I really wanted to swap the board for the real thing.

But I was curious why it didn't work on my Mac, so I compared hardware:

In this picture it is really clear to see that the USB2Serial chip is different on the chinese board. Understandable, a FTDI is not a cheap chip, and to press BOM costs, they probably changed it. The downside is that my Mac did not recognise the chip, so I swapped the board and I could use my good old Mac again :-)
The next problem was the firmware.. a empty arduino will not drive stepper motors and fire up a laser, so I needed some control software..

When searching for control software, you will find that a CNC machine has almost the same type of controls as an laser cutter. In theory, it is just a X/Y frame that can possible have a Z axis to control the cutting dept. Luckily, CNC controls have a standard called g-code. This is a (serial) interface that will specify some abstract commands (turn spindle on/off, go to position (x,y), draw line, draw circle, etc).

It was pretty obvious that by supporting this standard, I could interface with a lot of existing software, so that became my highest priority.
I found this really cool project that does exactly what I want: use an Arduino to convert g-code to electrical signals for driving stepper motors and turning on/off pins that could drive cooling/spindles/lasers/etc.
So I quickly downloaded GRBL and started to look for support for the control board used in my laser cutter..

Off coarse, my laser cutter was not supported out-of-the-box. Which, I don't really mind. I'm a professional software engineer, so getting the machine to work should be a piece of cake for me..
I created my own header-file to support the stepper motor drivers and the laser.

It always feels like a step back. Taking something that works, stripping it and starting to rebuild it, but when it works, the thrill is even bigger!

After a couple of hours of reading wiki's, looking at datasheets and hacking code, my cheap Chinese cutter was fully supported by the GRBL project. I have all the ingredients now to do some real work, let's define a workflow.

Now that my lasercutter can be driven used g-code, I need a certain workflow.
Having seen the extremely high prices of commercial software, I really wanted to embrace open source, and create a full open source workflow.
As a start, I will use the open source graphics editor GiMP to convert any photo to grayscale.
After this step, I'm using Inkscape to brush up the image, create paths and generate g-code by using 2 extensions. One for raster-engraving (images) and one for vector-engraving (lines).
And finally, using a open source tool named Universal G-Code Sender, I can send the g-code to my laser cutter, align the laser on a start point and see how long a job takes to finish.
Running all this software on a Ubuntu laptop makes the full software stack open source. It sounds like a bit of a hassle, and I'm pretty sure that there are better alternatives, but this was a quick solution.. and it works really well!

And now the part that everybody is waiting for.. is my open source poor-mans-setup any good?

Let's start off by a small image that has circles and straight lines.

Wow! This was a result that I didn't expected! The lines are pretty sharp and the circle is perfectly round. Also, the laser is now carving almost a millimeter into wood, which was far beyond my expectation of a 2500mW laser.

Let's do that big piece again to see if my g-code conversion is any good and if the machine does not lock up during cutting of a bigger project.

The 2 small artifacts in the bottom of the image are my own fault, but you can clearly see that the quality and sharpness is way better. Some edges were still a bit shaky, so I dropped the speed of the laser and decreased the power of the leaser.
Finally I wanted to test a photo-realistic image. Here are my results: 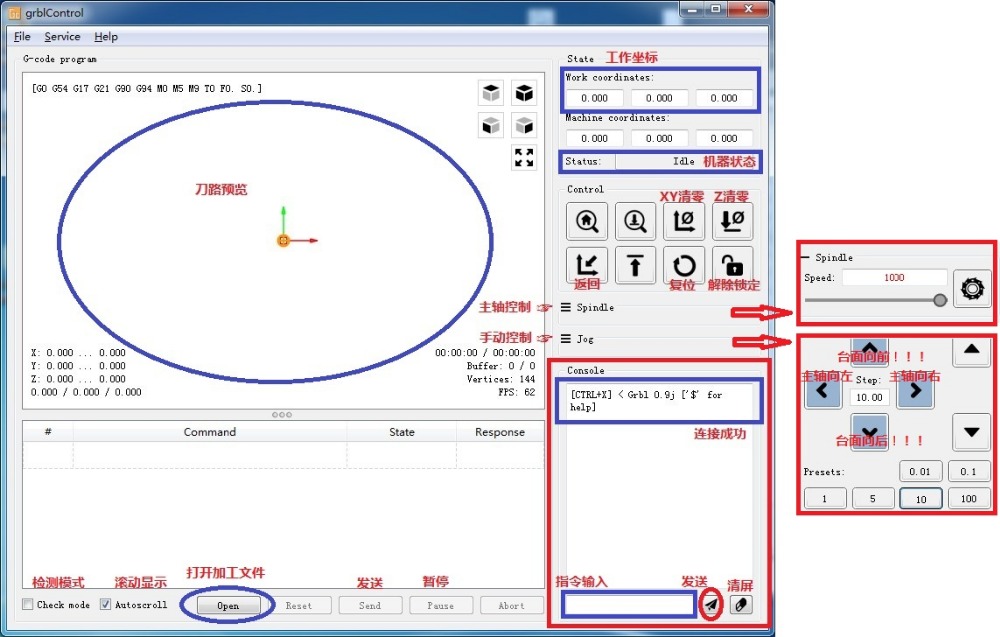 I think the results are clear. I now have a machine that is capable of doing photo-realistic engraving and cutting simple lines.

But I won't stop here! This was a very nice introduction into g-code and driving stepper motors. But I started off this article by telling that I wanted a high power laser, not a toy. So I still have some plans to build on this foundation. I want to extend the frame, move the laser to the back by adding mirrors, and change this 2.5W laser into a 200W+ CO2 laser. This will enable me to engrave and cut materials that I can use for enclosures or artwork..

I do lot of stuff like this. In the past I played around with high power LED's (100W+), created tube amps, build my own arcade machine, build electronic cigarettes, and hacked a lot of chinese Chinese gadgets.
I often get the question: 'Why?'. I always give the same answer: 'Because I can'.